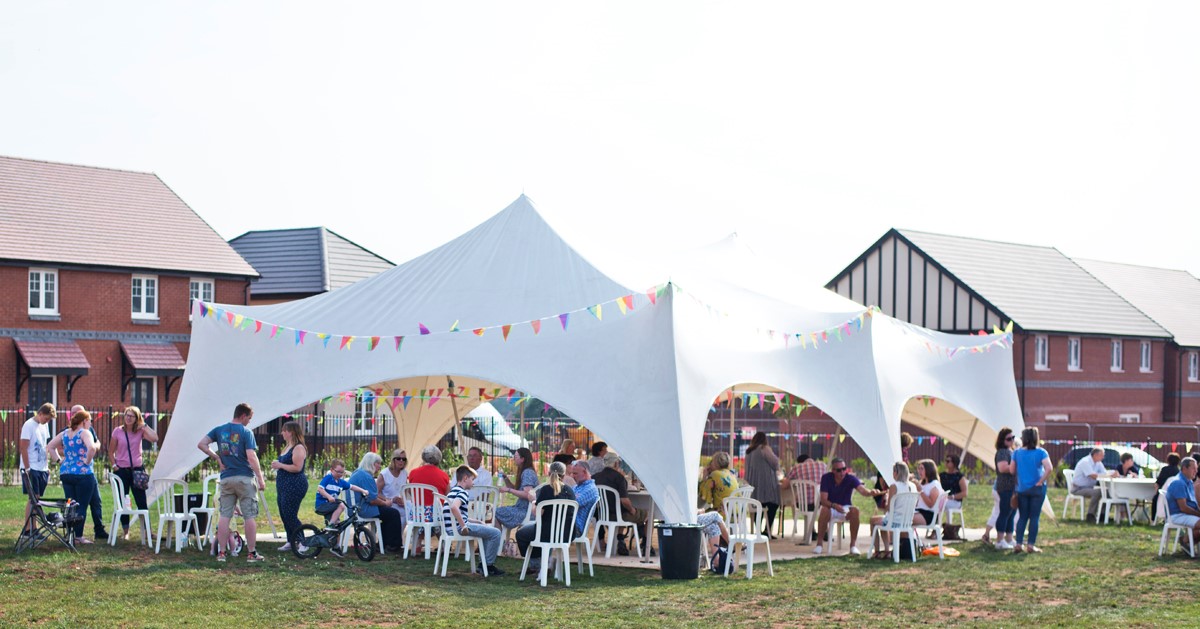 RESIDENTS of a new neighbourhood in Ross on Wye gathered for a garden party hosted by the Edenstone Group.

Dozens of homes at St Mary’s Garden Village are now occupied and the event was an opportunity for new neighbours to come together and enjoy a barbecue and hog roast, homemade cakes, ice-cream and refreshments all on the house.

Edenstone Group sales director Adele McCoy said: “St Mary’s Garden Village has really blossomed and while it’s a relatively new neighbourhood, there’s already a strong sense of community. Residents have formed a Facebook group to help get to know one another but there’s nothing quite like meeting up in real life.

“We decided to host the garden party to bring everyone together – existing residents and those thinking of moving here. It was a real success and helped people meet those living in other parts of the development or those who will become their new neighbours. One of our homeowners even served up homemade cakes to raise money for Macmillan.”

St Mary’s Garden Village is being developed by the Edenstone Group’s two housing brands – Edenstone Homes and Bluebell Homes. The new community will eventually feature 290 homes, plus a range of facilities including feature allotments, walking and fitness trails with equipment, and a gym with a community hub.

FacebookTwitterLinkedInRedditWhatsappTumblrPinterestVkEmail
We use cookies on our website to give you the most relevant experience by remembering your preferences and repeat visits. By clicking “Accept All”, you consent to the use of ALL the cookies. However, you may visit "Cookie Settings" to provide a controlled consent.
Cookie Settings Accept All
Manage consent

This website uses cookies to improve your experience while you navigate through the website. Out of these, the cookies that are categorized as necessary are stored on your browser as they are essential for the working of basic functionalities of the website. We also use third-party cookies that help us analyze and understand how you use this website. These cookies will be stored in your browser only with your consent. You also have the option to opt-out of these cookies. But opting out of some of these cookies may affect your browsing experience.
Necessary Always Enabled
Necessary cookies are absolutely essential for the website to function properly. These cookies ensure basic functionalities and security features of the website, anonymously.
Functional
Functional cookies help to perform certain functionalities like sharing the content of the website on social media platforms, collect feedbacks, and other third-party features.
Performance
Performance cookies are used to understand and analyze the key performance indexes of the website which helps in delivering a better user experience for the visitors.
Analytics
Analytical cookies are used to understand how visitors interact with the website. These cookies help provide information on metrics the number of visitors, bounce rate, traffic source, etc.
Advertisement
Advertisement cookies are used to provide visitors with relevant ads and marketing campaigns. These cookies track visitors across websites and collect information to provide customized ads.
Others
Other uncategorized cookies are those that are being analyzed and have not been classified into a category as yet.
Save & Accept
Powered by